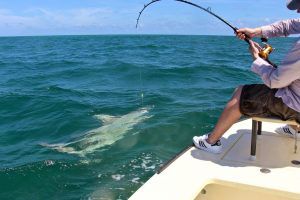 The inshore shark fishing in Miami and in the shallow waters of Biscayne Bay is absolutely amazing! There are several species of sharks that can be caught here. Let me give you a brief description of what shark fishing is like. 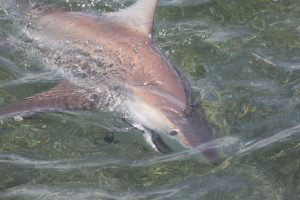 I want to start with Black Tip Sharks because they are the best and most exciting shark to fish for. They have a pretty copper tint with a cream colored lightning bolt pattern on their sides, and of course the black tips on their fins. We catch both Black Tip and Spinner Sharks. Both are very similar, but a Black Tip on the anal fin is what distinguishes the two apart. They both fight alike; usually jumping several times as soon as they feel the hook. When they jump they spin. I have seen some of these sharks jump as high as ten feet in the air while spinning four to five times before they land. All within seconds later; jump and spin again. I have seen these sharks jump as many as six to eight times.  Also while fishing for Black Tip sharks, when the conditions are right; you will see these sharks tracking the bait on the surface over a one hundred yards away just by the scent of the bait. You will see the dorsal fin as it breaks the surface of the water, and watch as your bait gets swallowed. Hang on because this shark is very fast and pulls hard. 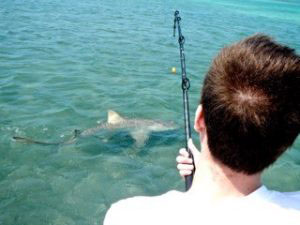 Lemon Sharks prowl the shallow of Biscayne Bay. Lemon sharks run from four to seven feet long and weight from 60 to two hundred pounds. It’s hard to believe that such a large shark will be swimming around in shallow water. Most of my Lemon Shark fishing will be done in less than three feet of water.

Lemon sharks have a strong first run. They don’t jump, but will break the surface of the water as they try to bite at the line; as it runs across their back. They won’t hesitate biting the boats trim tabs or the engine, just anything that they can sink their teeth into. Lemon sharks are also very exciting sharks to fish for; it is a visual experience as we fish them in such clear and shallow water. 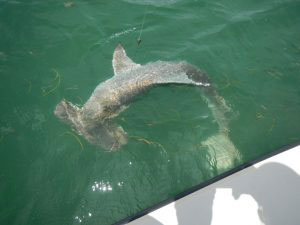 Hammerheads are just another that can be caught while fishing Miami and Biscayne Bay. These sharks have a great range for swimming. They will travel all over from Deep Ocean to the inshore waters of Miami, and throughout the many channels that run through Biscayne Bay. Most of the Hammerheads that we catch are the smaller ones which is not a bad thing. They will run on average six to seven feet long and weigh ninety to one hundred and fifty pounds. They have great speed and stamina and are a very cool looking shark. No other shark can turn as sharp as the Hammerhead. And every so often a giant Hammerhead shows up, they usually freak everyone out; when the dorsal fin sticks over three feet out of the water and has at least three feet between its eyes and is over ten feet long and can weight over a thousand pounds. I have also had Hammerheads go after and eat large Tarpon while we are fighting them; they will also eat the Black Tip Sharks while we are fighting them. Let’s just say – it’s a dog eat dog world and they at the top of the food chain. 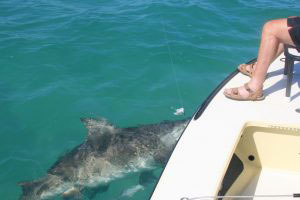 There are some very large Bull Sharks swimming around the waters of Miami and Biscayne Bay.

The Bull Sharks here average eight to ten feet long and weigh three to five hundred pounds. We get some smaller Bull Sharks, but just to six feet long and maybe one hundred and fifty pounds only full grown adults. You never know when a Bull Shark will show up. We catch them while fishing for Black Tip Sharks and even show up while fishing the shallow flats for Lemon Sharks. We can target them and I have a few guys that do, but fair warning; they are very strong and heavy and just have no quit in them. Bull sharks, more than another shark, go after fish that you have hooked. They love to eat Permit, Tarpon and also had bitten the tails of Black Tip Sharks completely off. A Bull Shark has the strongest bite of any shark including the Great White.

We booked a half day fishing for Sharks and Barracuda while fishing the flats of Biscayne Bay. We started out of Key Biscayne and needed to catch some fish for shark bait. We caught a couple small Barracudas the usually work very well. We had some good action while Barracuda fishing and hooked up to […]

Inshore Sharks and tarpon fishing for Chris and his son

I got a call from Chris who was looking for a inshore fishing charter for tarpon fishing in Miami for him and his son. We decided that we could squeeze in some shark fishing also. He wanted to do some night fishing for the tarpon so we fished for sharks first thing.  They caught shark […]

Mike and his son catch a hammerhead shark

Mike and his son Teag came to Miami looking to take a inshore fishing charter. We started out fishing for black tip sharks but some storms with rain started to develop all around us. So we headed south to try for some lemon sharks on the flats of Biscayne bay.  The fishing for lemon sharks […]

Darrin was looking for a inshore Miami fishing guide so he could take his two sons flats fishing. He had tried some offshore fishing charters in the past and was looking to fish for some Big game fish in the shallow protected waters of Biscayne bay. We headed out to first catch some shark bait […]

Ted came to Miami wanting to go shark fishing. But he gets seasick very easy. He called me and I told him we can shark fish in the flats of Biscayne where it’s too shallow for any waves or we can go inshore Miami and fish for sharks there. He got a very calm day […]