I have the experience of being a Biscayne Bay fishing guide for over 20 years. 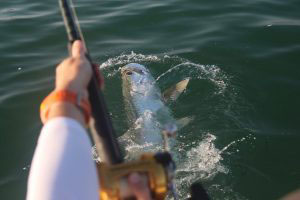 I will start with the big three – Tarpon, Bonefish and Permit. If you are lucky enough to get all three in one day, this is called a Grand Slam. I guided many anglers to a grand slam, but to be honest, far more get two thirds of a slam. It does not matter what that third fish is, a Bonefish, Tarpon or Permit; they are all just hard to catch or they’re just not around that day.

I’ll give you a brief description of each species so you can have some idea what fishing for them would be like. 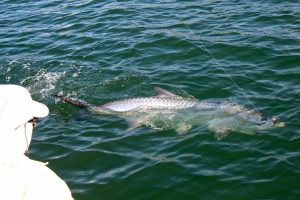 I will start with my personal favorite, which is fishing for Tarpon. There is a lot to like about these fish. In Miami, they are a very strong fighting fish that will jump a lot. I enjoy getting photos of them when they jump or roll, although this is not an easy thing to do.

I have a high quality DSLR camera that I use just for them. It’s very difficult to get good photos of them jumping on a cell phone – they are usually too far away and it happens so fast that most people just get the photo of the splash. But I will get you some good photos for the memories of them jumping, rolling or when they come along side of the boat. If you take the time to check out the tarpon photos on this site, you can see some great shots I have taken for customers. I will send all the best photos of your fish cropped and adjusted for free. We can get tarpon year round, but most of the tarpon fishing is from December to mid-July, with the best fishing being done in April to July. Most of the tarpon will range from sixty to one hundred and twenty five pounds. When fishing for tarpon, I will use live bait this is included in the price for the charter. The bait preferred is shrimp and crabs, but tarpon also will take artificial in certain situations. If you are lucky enough to hook and land a tarpon, believe me, you will remember that experience for the rest of your life. 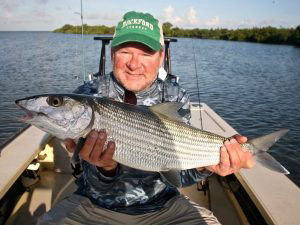 Let me tell you a little about Bone Fishing in Miami and Biscayne Bay. The Bonefish run large here and will average four to nine pounds, with several coming over the side of the boat ten pounds or more. The largest bonefish that I’ve caught while on a charter was thirty-four and a half inches that would make it at fifteen pounds or more that’s near the world record. Shrimp and small crabs are the bait of choice when fishing for Bonefish. Shrimp is the top bait for them, but they can be caught with artificial lures like a Millie’s jig, this is very challenging and takes a lot of skill to do. When you hook a Bonefish, there are not many fish that are capable to make a drag melting run as they can. After that big run, you will have to chase them around the boat as they are trying to get away by getting under the engine, around the push pole or anything they can.

Permits are also very sought after fish that comes from the ocean, but frequent the flats of Biscayne Bay. 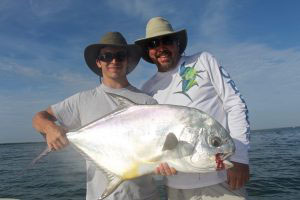 The Permit is also on the large side from anywhere else you could catch them. They will go from four to over forty pounds, but most of the Permit we catch, will weigh around fifteen to twenty five pounds. They are a handful to fish for on light spinning tackle. They are very good at finding anything to break you off on, like sea fans or coral heads and I even had them go a hundred yards to the only crab trap for miles and just wrap around it several times. Again shrimp and crabs are the bait of choice you need to spot them first and lay an accurate and soft cast right in front of them to get a bite. Fishing for Permit is as close to hunting as fishing can get. You have to look for fish or other signs that will give their presence away. Some of the signs that you look for are pushes or wakes in the water. Sometimes it’s just the tips of a tail breaking the surface or just barely dimpling the surface. They are a challenging fish that is high on the list of fishing accomplishments. 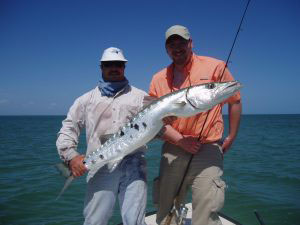 Barracuda are another fish that I like to target when guiding Biscayne Bay. I like using top water lures for them if I have anglers that like fishing that way and are good at it. Working a top water just right and just fast enough is what it takes to get a strike, lots of them will just follow but you have make them bite it.

We also catch them while fishing for sharks and using live bait. The barracuda in Biscayne Bay run from two to over thirty pounds. When you get a big one, especially one that has top water lure hanging from its mouth; this makes a great photo with all of its teeth pointing everywhere. For the photo – if you don’t want to hold it I will while you stand next to me.

Jack Crevalle and Yellow Jacks are two very cool fish we catch in the Bay. They can run from one pound to over twenty five pounds solid strong fish that you can encounter anytime or anywhere. But there is a time of year they get schooled up and will take top waters lures very well. Sometimes four to maybe six jacks will be attacking the lure at the same time. I like to use one single inline hook when they are
doing this so you get more strikes before you hook up. This fishing will wear your arms out.

Biscayne Bay is a great place for what we call Fun Fishing. This is catching lots of different species of fish and keeping the rod bent. So that makes it a good place to take your kids fishing or to introduce them to fishing. With the coral reefs and channel systems you can catch a large variety of fish such as ladyfish that are big here, related to tarpon, but only grow to a few pounds. They still hit hard jump like crazy and will run you all around the boat. We also get Bluefish and Blue Runners that also make great shark bait. Lots of different Snappers like Mangrove Lane Snapper, Mutton Snapper, and Yellow Tail Snapper. Also we can catch different kinds of Groupers (Red Grouper and Gag Groupers); along with all kinds of bottom fish and Speckled Sea Trout.

Jon and his son Fulton wanted to go fishing in Miami. They wanted to catch a tarpon and permit. Both can be very difficult fish to catch on some days and others it’s pretty easy. We started out with trying to catch the tarpon we tried some spots for them and had them around but […]

Paul gave me a call about fly fishing Miami for some tarpon. We were able to book the charter for some night tarpon fishing. We get started and David needs a little help with his fly fishing. I gave him a couple pointers with his fly cast and he picked that right up and a […]

I have had the pleasure of taking Rob Herman and his family fishing for around seven or eight years now. Rob love’s to fish inshore Miami for tarpon. We have caught several tarpon over the years. On this day I got to meet his daughter Melissa and do some tarpon fishing. They had fished the […]

Wades wife had a conference in south beach Miami and he got the green light to go do some inshore fishing. He gave me a call and we set up a half day charter. He has always wanted to catch a tarpon and it’s a good time of year for tarpon fishing in Miami. We […]

I have been guiding Teemu from Finland for around twelve to fifteen years now. He came to Miami for the tennis tournament and wanted to do a little fly fishing. He brought a friend and his daughter who is seventeen and has never been fishing before. We decided that her first fish should be a […]

My nephew Kenny came down to south Florida for their first Baby Gender reveal party. I had promised  the legendary flats fishing guide, Bob Branham, that I would help collect bone fish for BTT (bone fish tarpon trust). For some reason this crazy jack swam into about 18 to 20 inches of water and ate […]

Conner’s Mom called me looking to book a fishing charter for inshore Miami. The two sixteen year old young men were on spring break from Buffalo, NY. Both of them have been on several flats fishing charters down in the Keys, but have never fished out of Miami.  We met up that morning, keeping in […]

Keith came from New Jersey to escape the cold weather. He has always wanted to catch a bone fish. But had not had any luck fishing for them in the keys. So he thought he would give it a try out of Key Biscayne. We gat some great weather and some good bone fishing. He […]