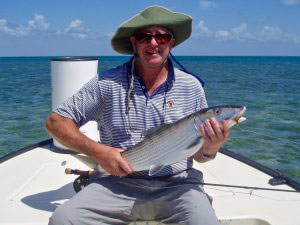 If you are a fly fisherman, you will enjoy fishing Biscayne Bay. This is where the Florida Keys begins – with no roads and unpopulated islands, with miles of grass flats separated by channels. This is what makes this area so good for Bonefish, Permit and Tarpon and many other species of fish that can all be caught while fly fishing.
Biscayne Bay is very well-known for its very large Bonefish. Several world records have been made in the Miami Biscayne Bay waters. Bonefish are a very challenging fish to fly fish for. They are difficult to see by most anglers and are very spooky. You need to make a good accurate fly presentation without scaring the fish. You will need to have some fly fishing skills. Biscayne Bay Bonefish do run in all sizes, but the average bonefish will go from four to nine pounds with some Bonefish going well over ten pounds
and that is a trophy Bonefish. 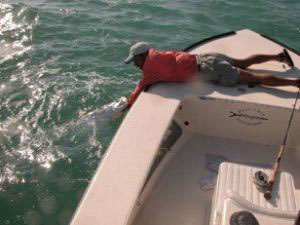 Miami and Biscayne Bay has some great opportunities for a fly angler to catch a Tarpon. Most of the Tarpon here run very large; most will over a hundred pounds but the average range is sixty pounds to around one hundred and twenty five pounds. There are many different ways to catch a Tarpon on a fly rod, but by far; my favorite way is to sight fish for them. Think of this; a one hundred pound fish around six feet long swimming by its self in crystal clear water and you throw a fly to it. Or it could be a string of ten or twenty Tarpon or even a hundred that’s going to give you several opportunities to get the cast just right.

While casting that right cast, when you are stripping the fly back and when he decides to eat it! You watch that tiny fly get swallowed into the giant mouth. Then the fly line just stops as you just start to feel the weight of the fish then it’s just ripped from your hands as it becomes air borne. There is nothing better than that when it comes to fly fishing. 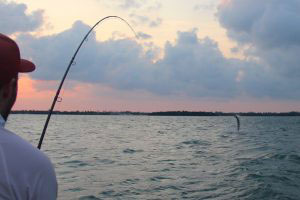 If the conditions are not good for fly fishing for the big three – Bonefish, Permit and Tarpon, don’t worry there are alternatives. There is plenty of other species to fish for here. The channels that separate the grass flats have Ladyfish, Bluefish, Mackerel, Blue runners, Jacks and many others to put a bend in your rod.

Teemu comes to Miami to fly fish for tarpon

I received an email from a very good fly fisherman from Finland. He was going to be staying in Fort Lauderdale and wanted to fly fish for tarpon and sharks. I have been guiding Teemu for at least 20 years and whenever he gets to South Florida we go fly fishing for mainly tarpon, but […]

Paul gave me a call about fly fishing Miami for some tarpon. We were able to book the charter for some night tarpon fishing. We get started and David needs a little help with his fly fishing. I gave him a couple pointers with his fly cast and he picked that right up and a […]

Enrich had come all the way from Austria in hopes of catching a tarpon while fly fishing. When he got to Miami he gave me a call as he was looking for a tarpon fly fishing guide. He had been traveling all around South Florida fly fishing with other guides from Pensacola down to Key […]

A fellow Miami fly fishing guide had gotten sick and was not able to take Braydon fly fishing in which I was able to help him out. Braydon wanted to sight fish tarpon with a fly rod. This is a very difficult challenge where you try to get the boat positioned in front of some […]

Man from Japan wants to go fly fishing in Miami

I got an email from a company called Miami Japan tours. They have a guy that is coming to Miami on business and would like to do some fly fishing while he is in Miami. After several emails we get it all put together. He wants a half day guided fishing trip in the morning […]

I have been guiding Teemu from Finland for around twelve to fifteen years now. He came to Miami for the tennis tournament and wanted to do a little fly fishing. He brought a friend and his daughter who is seventeen and has never been fishing before. We decided that her first fish should be a […]

tarpon on fly and bone fish

Mark likes to book me for night tarpon fishing charters that I launch my boat from Crandon Marina on the island of Key Biscayne. As we are heading out, all of the other Miami fishing guides are coming back in for the day. We get to fish Biscayne Bay by ourselves. We first go for […]

Big fish mark lives up to his name

I have been guide fishing; Mark, on the flats of Biscayne bay for over 18 years now. In those years of fishing he has gotten bit by the fly bug. Saltwater fly fishing is very difficult And yesterday we had winds of 20+ mph, straight out of the south. We were going for bonefish, but […]

Santiago and his brother came to Miami to find a fly  fishing guide. They do a lot of fly fishing in there  country of Chile. They are very experienced freshwater trout fisherman and wanted to try some saltwater fly fishing. We set out looking for tarpon in the inshore waters of Miami. The first couple […]

Jessica was looking for a fly fishing guide for Miami. They were coming to Miami for a quick weekend fishing charter from Colorado. She booked a 3/4 day charter with me on Sunday. We headed out in search of some tarpon fishing on the inshore water of Miami. We found a nice group of rolling […]